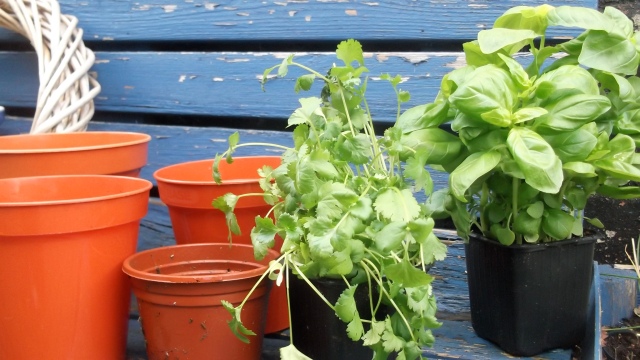 I picked up some basil and coriander at the supermarket on Saturday.

You probably know the sort. Hundreds of tiny little plants crammed into a pot, wrapped in cellophane to make them stand upright, then sold as ‘grow your own herbs for the kitchen!’ I don’t think anyone actually expects the poor little things to last very long.

I’m not sure what prompted my rescue mission. This isn’t the kind of thing I’d usually buy, but then I don’t usually spend my Saturday afternoons in the supermarket either, so I was up for a bit of trying something new. And I’d been inspired by visiting Fay in the summer, and seeing her flourishing rescued basil, and fancied a bit of heroism myself.

First thing to do was prize the poor things out of the little pot they were squeezed into. Look at them there all packed in together! Those poor roots! 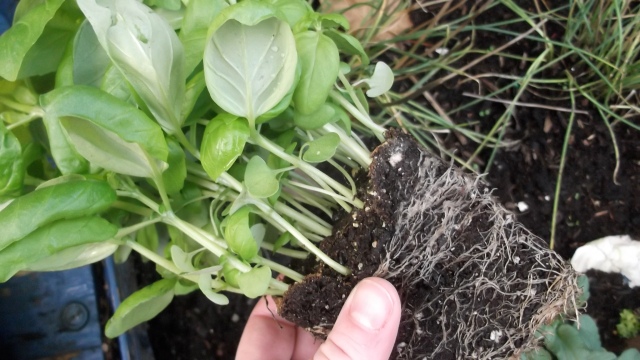 The coriander looked even worse – lots of leaves but hardly any roots at all, and wilting almost as soon as I got it out of the pot.

I split the coriander into about 4 bits, and planted them all in the same big pot. The basil I divided over a couple of pots – it looked a bit healthier.

As you can see, the coriander had only been held upright by the cellophane, and flopped over before I even planted it into its new pot. Four days later it still hasn’t recovered, and I resorted to snipping at least half of it to stick in my tea last night before it gave up completely.

The basil’s still going strong though, and I’m hoping I can keep it alive for another few weeks yet. It’s pretty nippy round here right now, but it’s on a double glazed window sill, the sunniest in the house, and it’s above a radiator, so maybe it’s in with a chance. Who knows.

This entry was posted in in the garden, preserving food. Bookmark the permalink.