It’s still ever so hot here. I’ve spent the morning pottering about at the community garden, and enjoying a lovely shared lunch (home made bread, and hummous, and chocolate cake!), and now I’m hiding in the shade before heading off on a little mini local adventure by myself.

While I’m cooling off, I thought I’d show you my new compost bin. This has taken me weeks to build, as well as much swearing and stomping, and it’s still not entirely finished, but it’s good enough.

That picture at the top is the old bin. Peter built it three years ago, and it slotted in nicely under the enormous tree, which has now been removed to make way for my lovely terrace. Here’s a link to what it looked like when it was first built. I moved it a while back when we were building the terrace, and it’s sat in this shady corner of the garden ever since, looking increasingly sorry for itself, with the reed covering coming off, and the roof caving in.

However shabby it looked, it still made good compost, even if it wasn’t very easy to get out. 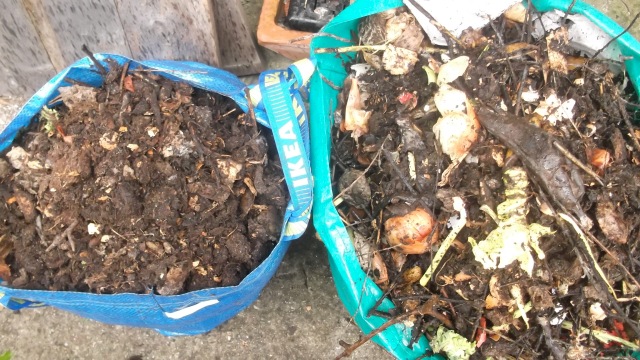 This is the empty bin, which I’ve now dismantled. The window frames were falling to pieces (unsurprisingly), but I’ve kept the glass.

And so to the new bin! 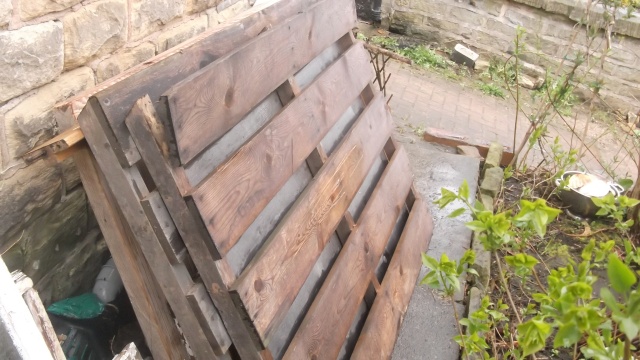 A friend gave me these flat palettes a few weeks ago, in exchange for, well, I was going to give her a jar of marmalade but I forgot to take it with me, and she gave me a jar of home made jam instead. I think I got the better end of the deal there! I also used a bit of an old door.

Much cursing and banging and sawing and several weeks later, and I’ve got a two-chambered compost bin with a very sturdy back. It felt like it was raining for weeks, so whenever I ran outside I had to know exactly what I was doing or I got soaked. I spent a lot of time staring at it through the kitchen window, scratching my chin. 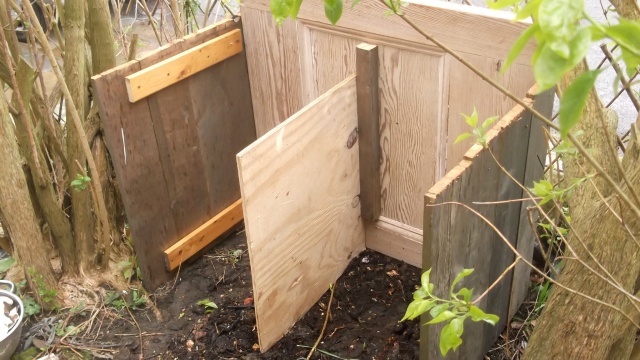 The front is removeable so I can easily dig the compost out and turn it over. And the top is sloping, so the rain runs off.

The lid isn’t actually attached yet, and still doesn’t quite fit the bin. I don’t think I’ll win any prizes.  But it looks pretty alright I reckon – important as it’s right next to the pavement.

And anyway, my attention has now turned to sitting in the garden rather than building things.

Right, best get out of the door on that mini adventure!

This entry was posted in in the garden. Bookmark the permalink.