Sometimes we look after our friend’s small furry dog.

He’s a bit pesky, and always ready for mischief, but with a face like that he’s usually forgiven.

(That isn’t our house, just so you know, although I kind of wish it was).

Last time the Furry Fiend was here, my sister came to visit with my three nephews. Obviously chaos ensued for a while, and there was much barking and running and retrieving small plastic animals from various mouths.

And so we had a let’s-draw-a-picture-of-the-dog competition. Two nephews were engrossed in something else so the competitors were mostly adults. Some of those pictures were quite dreadful (er, you’ll notice I’m not showing you mine), but the winning picture (and the only one done by a small child) was exceptionally cheerful.

I was so taken with it, I asked if I could keep it to put on the wall, and was informed that no, I could not. So I took a photograph and stored it away.

The artist’s birthday was this week, and casting my mind around for a suitable present, I remembered the drawing of the dog. And I remembered sewing an outline of a drawing of my own onto fabric. And so an idea started forming…

First I printed the drawing, and I’m sure you’ll agree it’s a fine one.

Look at those feet! That little face in the air! The lead, and the floppy ears! Quite delightful, and just begging to be turned into something cheery.

And s0 I drew over him with black marker, traced him onto white cotton, and sewed round the outline with embroidery fabric. Since I didn’t have lots of time, I left out some of the detail, including the bed (complete with pillows) that he’s standing on.

SO cheerful! I admit I was quite tickled at this point, and also quite jealous that I wasn’t keeping him for myself. 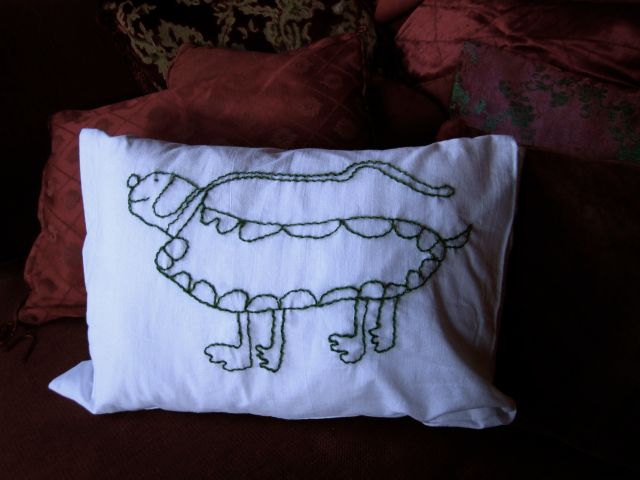 And here he is, turned into a cushion – just the right size for a six-year-old’s bed. What fun!

I’m very impressed that my nephew recognised his picture after all these weeks (and, er, noticed that I’d missed out the bed…). Apparently he wants to colour it in, so my sister is off to buy fabric pens. I can’t wait to see what colour he ends up.

(I also think I might need to embroider him onto something else that I can keep for myself. What do you reckon – another cushion? A t shirt?? A pillow for the real Furry Fiend???)

This entry was posted in look what i made!, needle and thread. Bookmark the permalink.

7 Responses to a drawing competition