tea from the garden

It’s been ever such a lovely day today, and I finally got chance to have a little potter in the garden this afternoon. I was in seed-planting mode, well aware I’d missed the official planting dates for some things (not something I generally worry about, but I’m trying to be a bit more diligent this year).

The first job was to clear some space in greenhouse 1 – partly by removing pots from things that had died (oops), and partly by harvesting a few radishes which I planted in October and which had soldiered on bravely throughout the winter.

Five whole radishes! (Well, I suppose you could describe that as ‘four whole radishes and a tiny bit of vaguely pinkish wood’, but that would be rude, so I won’t).

Next up was a little bit of lettuce that had bolted in the hanging basket (including the flowers), and some tiny leaves and flowers from some rocket that clearly got a bit too warm in the greenhouse.

I’m keeping track of how much I harvest, and how much I would have spent had I bought in the shops, on this page. Apparently those radishes saved me two whole pence!

I was a bit unfocused this afternoon, and instead of tackling my list of jobs one at a time, I wandered vaguely through the garden, picking up sticks, doing a little weeding, moving things from one place to another. I started pulling the weeds from under the kitchen window, and remembered I’d had a vague feeling they were actually land cress, so came inside to look them up.

After a few false starts on wildflower identification websites I found what I was looking for here – this is hairy bittercress, a strange name for an apparently tasty plant, with a firey punch a little like rocket. Scrolling down the list of ‘weeds’ I spotted another that grows abundantly in my garden.

I always feel I should pull it out, since it grows everywhere, but I quite like the little pink and white flowers. This is apparently herb robert – which has an odd smell but which is also edible (apparently you can also use it in an enema, although rest assured I won’t be…).

Enthused by the idea of boosting my salad profits and getting myself a tasty tea into the bargain, I grabbed a bowl and started picking. 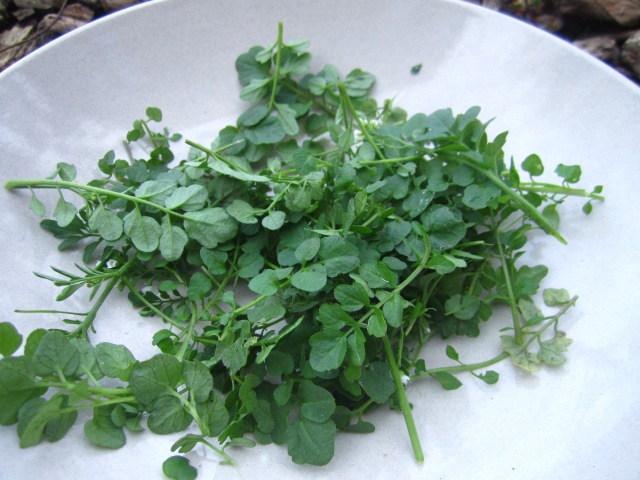 The resulting salad was fresh and vibrant, colourful and tasty, and felt like a proper treat. 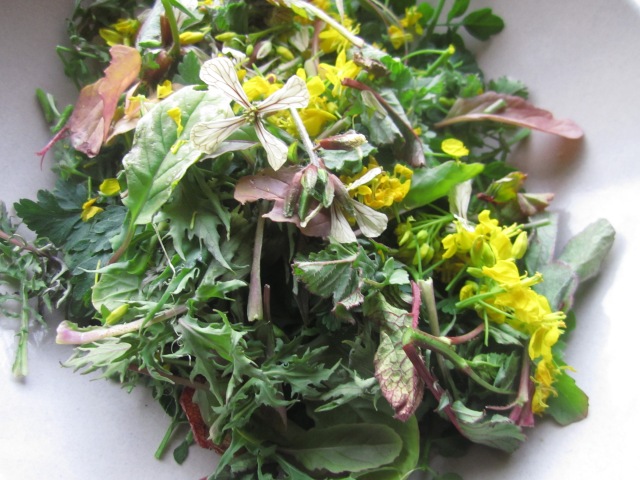 I’ve struggled to decide how to cost what I harvest from the garden. I think I’m going to look at what I’ve grown, and cost the closest thing I can find from the shop I’m likely to have bought it from. I wouldn’t have bought an organic speciality gourmet herb salad from a posh shop (although that’s what I’ve ended up with), so I’ve costed this based on a bag of ‘nice’ salad leaves with rocket from a supermarket.

Which means this little salad saved me a grand total of 46p.

Obviously it’s more complicated than that – if I’d have gone to the shops it’s unlikely I would have only bought 46p worth of salad. But this is a topic I’m planning to return to throughout the year as I harvest more, so we can work on the complications later…

This entry was posted in conscious living, frugal friday, in the garden, in the kitchen. Bookmark the permalink.

4 Responses to tea from the garden