why i love triathlons

Shall I show you what I got up to at the weekend? 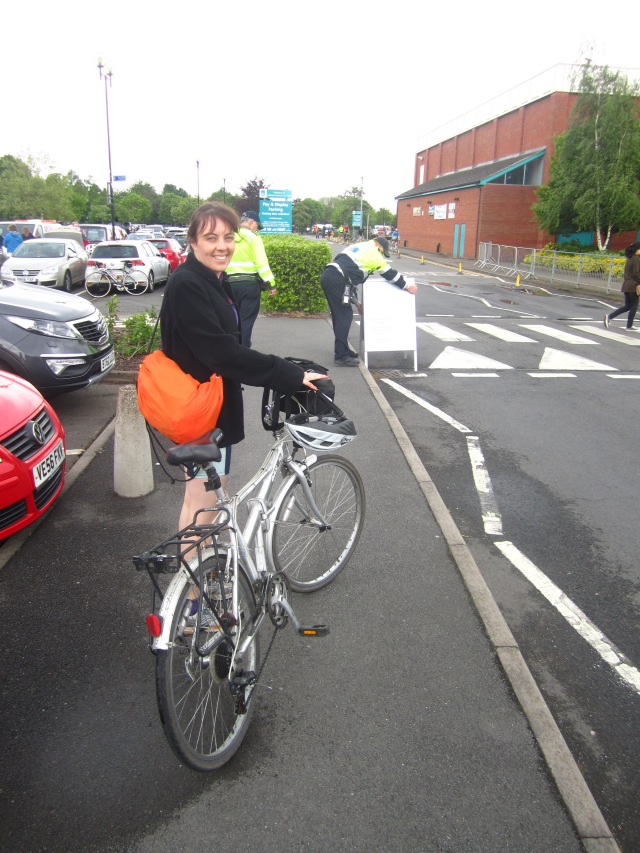 Yep, me and my folding bike (well, one of them) did the Stratford Triathlon!

I love triathlons. That’s a phrase I never thought I’d say, but it seems it’s now true, against all my better judgement. I did this same one seven years ago and came last (of course), and couldn’t resist a rematch when a friend said she’d do it too.

Bizarrely, I even enjoyed the swim training this time! If you can call it training, that is – me sedately swimming lengths of head-out-of-the-water breaststroke while trying not to attract the attention of the lifeguard.

I wibbled on the day of course. Took everything out of the car, put it back in again. Packed and repacked bags, and read the race instructions over and over. I bought race belt, but in all the dithering didn’t get round to attaching my number to it until the very last minute.

I found my organised friend in the toilet queue (well known pre-race meeting point), and while she disappeared off to be organised, I somehow ended up racking my bike with just ten minutes to spare. With six minutes to go, I was wandering round in tri suit and bare feet, trying to find the entrance to the swimming pool and wondering if I dared push in the toilet queue.

Eventually we started. This race is organised so the fast men start first, then the slow men, then slow women, then fast women. I was fourth woman in the pool, as I’d put down such a ludicrously slow (but pretty accurate) swim time of 20 minutes.

The swim was uneventful – much calmer than the panicked flapping of seven years ago. This time I had chance to look around me (because my head never went under the water) and see how many people were overtaking (lots, but there was plenty of space). I stopped at the end of each length to let people past. With just two lengths to go I smiled at the woman taking photographs, and started to think about the bike course…

It’s always disorientating when you go into the transition area from the swimming pool. It’s just a sea of bikes, and everything is the opposite way round to when you left it (well, not really, but you come in at the opposite end you went out). I had a brightly coloured towel (very sensible) but since it was raining, I’d shoved it inside the orange carrier bag that was given to every competitor – so the whole place was full of them.

Still, I found my bike eventually, and after a small wrestling match where I tried to get me and my damp tri suit inside a dry t shirt, waterproof jacket and shoes, we were off.

The bike ride was pretty cheerful actually! Much flatter than round here, and the miles whizzed by. It was pretty windy, but it wasn’t causing too much trouble until, after nine miles, we turned left and hit a headwind, a hill and a dual carriageway all at once.

But we got through it (with me being overtaken quite a bit), hit thirteen miles in an hour (some kind of record for me), and made it back to the transition area in an hour and eleven minutes. Hooray!

I’d given Peter a list of what times I was likely to be at which bits, but it turns out I’d cycled mch quicker than I thought I would, and he wasn’t there. I found my orange carrier bag again, racked my bike, argued with my race number belt while I took my waterproof off and set off on the run.

Have you ever tried to run after cycling fifteen miles? It’s quite an interesting experience. Your legs fight between wanting to carry on with their cycling motion, and wanting to give up altogether. You wobble and sway like you’ve had too much gin. People look concerned.

Still, I plodded on and even overtook a few people! The run course is off road (good job, after the coaches and horseboxes on the cycling course!) and twists and turns back on itself, so I saw my friend (who was ahead) a couple of times. It was so tempting to stop, but it turns out I can dig deep when I have to, and was able to carry on (although I might have sworn at the marshall who pointed people to either the finish line or the second lap).

Eventually I staggered through the inflatable finish line, barely knowing where I was, and someone put a medal round my neck. I remember wondering why there weren’t chocolate bars (there often are at the end of a race!). My friend was there with her medal and husband.

Sadly, there are no photos of me because Peter was still waiting for me to finish the bike course, not realising I’d finished super speedily before he even got there. He was quite surprised to see me come round the corner with a medal… 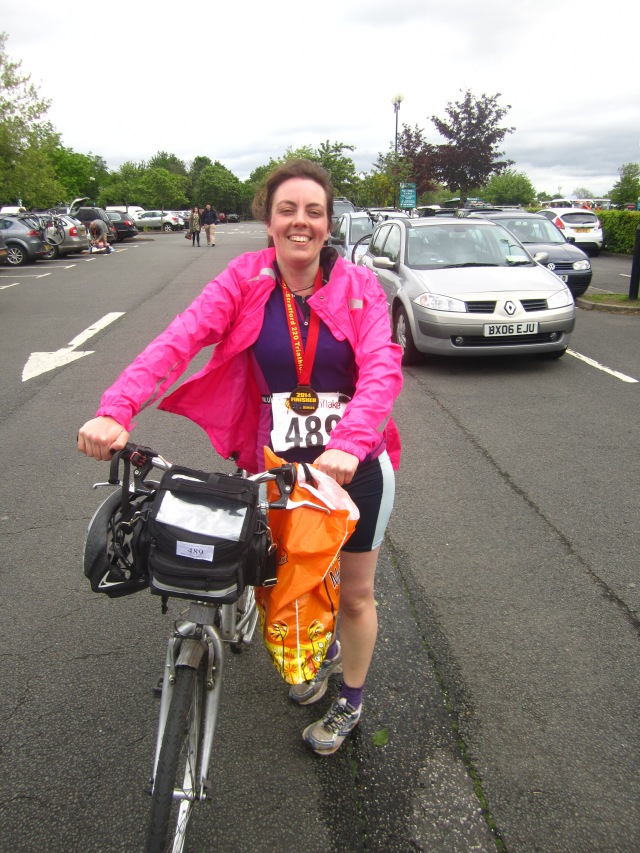 We re-created the run in the car park.

Because, well, why not? I wasn’t going to take my medal off though. I kept it on all afternoon.

So, as I said, I love triathlons. They seem less pressured and more fun than running-only events somehow. Probably because each of the individual distances isn’t too far, so lumping them all together doesn’t feel so difficult.

I can see more triathlons in my future.

First though, there’s a marathon to train for…

And before that, I’m doing the Race for Life next weekend with my family. This is pretty exciting – me and my sister have a history of being slightly competitive in running events, and of course she won’t be beating me in this one.

This time though we’ll be joined by my mum, auntie and cousin, none of whom would describe themselves as athletes. Last year my auntie was undergoing treatment for breast cancer and my mum did the race to raise money, and as you can imagine we’re all SO pleased that this year Auntie Lou is well enough to do it with us.

We each have our own goals. Mine is to get under 30 minutes, and to beat Lorraine. Lorraine’s, inevitably, is to beat me. Mum’s is to beat last year’s time of 1 hour 2 minutes (can she get under the hour??). Auntie Lou and her daughter Emily are aiming to finish, although I predict that Emily has a secret competitive streak, and that annoying habit of teenagers of being really speedy without even trying. Even my eldest nephew Kyle will be doing the race – walking the first half with Grandma, then running the last bit with his mum once she’s finished.

So it’ll be a grand day out, and we’ll all get another shiny medal to add to the collection.

We’ve set up a Just Giving page as a family, and if you’re inclined to sponsor us a couple of quid we’d be ever so grateful, and so would Cancer Research UK. Just click here. Thank you.

In the meantime I shall content myself with polishing my latest shiny medal. 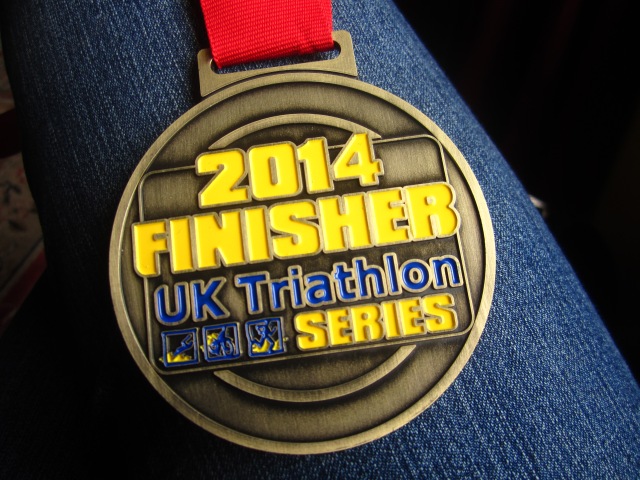 This entry was posted in adventures, cheerful living, running, some things about me. Bookmark the permalink.

4 Responses to why i love triathlons